The Assumption of Mary

On this feast day of August 15th, I found myself meditating and contemplating our blessed mother, the Virgin Mary.  In our catholic tradition, we believe the Assumption Day commemorates the belief that when Mary died, purely and holy as she was, her body was “assumed” into heaven to be reunited with her soul, instead of going through the natural process of physical death and decay.  For us, in our state of imperfection, it becomes an invitation that we too can hope for and expect the resurrection of our bodies at the appropriate time so that our bodies can be reunited with our souls. 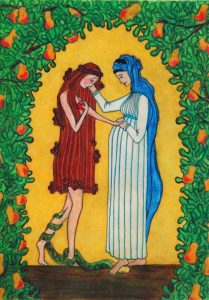 One of the more pleasant memories from my monthly meetings with my late spiritual director Father Fitz (Msgr. William Fitzgerald, 1931-2015) was sitting in a small alcove in his “house of discernment,” a house for students contemplating the priesthood, which lent for very personal conversations and silent prayer.  Just off to my left on one of the walls was a painting of Mary and Eve.  This original work was a crayon and pencil drawing created by Sister Grace Remington, OCSO, of the Cistercian Sisters of the Mississippi Abbey.  I found the artwork so interesting in that Eve, represented by our fallen nature, so prone to making mistakes as we are often seduced by the material world and the dark side, was being consoled by Mary, who displays by her facial expression so much hope and mercy.  Mary looks at Eve with love, placing her right hand on Eve’s shoulder to soothe her and console her, while she takes her left hand to grab Eve’s left hand and places it on Mary’s womb, trying to help her connect with our Lord Jesus Christ.   Consider reading  Mary and Eve by Garrett Johnson to get a more in-depth understanding of this painting.  Using this picture as inspiration, I found myself in meditation and contemplation.

In the Jesuit style of prayer, I placed myself in a garden as a bystander, observing the interaction of Mary and Eve.  It is early morning, and the air feels a little humid on my arms, but there’s a freshness and crispness to the air while I breathe the wet bark of the trees and sweet smell of the lilies.  The green grass hovers the land and the dew makes my sandals wet.  I can hear the buzzing of bumble bees, the sharp peek and yeep of the robin, and the three-second, crescendo and decrescendo whistle song of the cardinals.  The rays of sun are just popping through the trees as they illuminate Mary and Eve in the middle of the grass.

I can relate with Eve.  The serpent has wrapped itself on her legs, dragging down her movement towards spiritual development and closeness with God.  Good and evil reside in me, and I struggle daily to do what is right.  I often don’t see with the eyes or hear with the ears of the heart so that I can be in tune with God.  Deep down, my heart and soul want to abide by God, but I get distracted often with what surrounds me.  In this state, I often feel the tug back and forth between doing the right thing and sometimes falling because I am impatient, or maybe I’m too quick to jump to a conclusion.

You can see from the painting that Eve feels sorrowful, perhaps ashamed.  Don’t we feel the same when we fall short of doing what is right?  Perhaps, I may feel hopeless and despair because pride gets in the way.  It becomes hard to accept my fault and I am tempted to hide behind the trees when God comes into the garden, calling out for me, “where are you?”

As depicted in the picture, Mary comes to me as she comes to Eve.  She places her hand on my shoulder and consoles me.   She takes my hand and has me touch her womb so that I can feel her son, Jesus.  It is an invitation for me to be in relationship with the Son of Man.

For as much devotion as we Catholics have to Mary, we really don’t know much about her from biblical readings.  And to the point, as Thomas Merton explains in chapter 23, “The Woman Clothed with the Sun,” in New Seeds of Contemplation, “She remains hidden.”  It is in this state of hiddenness where she exhibits her poverty in loving submission to the Lord, in pure obedience of faith.  This transparency allows her “to be the perfect instrument of God, and nothing else but His instrument.”  It is in this transparency that God flows through Mary, so pure with love and mercy.  It would be easy to think that Mary is in God and God is in Mary.

Lately, I have been feeling a pull to understand Mary better and pray to her that she may intercede on my behalf before God.  I read several years ago True Devotion to Mary by St. Louis De Montfort (1673-1716) and pulled it out again when we read in our men’s prayer group the chapter from Merton’s New Seeds of Contemplation.  As the back cover of the book states, “it explains the wonderful spiritual effects it can bring to a person as they search for sanctity and salvation.”  He emphasizes that Mary remains hidden and transparent as she brings us closer to her son, the Word incarnate.  And as St. Louis De Montfort explains, “the more the Holy Ghost finds Mary, his dear and inseparable spouse, in any soul, the more active and mighty He becomes in producing Jesus Christ in that soul, and that soul in Jesus Christ.”

There were two key concepts that I gathered from Thomas Merton’s chapter:

As St. Louis De Montfort explains, we need Mary to be an example for us so that we can attain salvation, “and still the more necessary to those called to a special perfection.”  In addition, we can lean on Mary as our mother of humanity so she can bring us closer to Jesus: “Jesus Christ is the last end of devotion to Mary.”

With these thoughts, we celebrate Mary’s assumption to Heaven.  It is our hope that we too one day, by the grace of God, can dwell where she is.  As Merton states, “if human nature is glorified in her, it is because God desires it to be glorified in us too.”